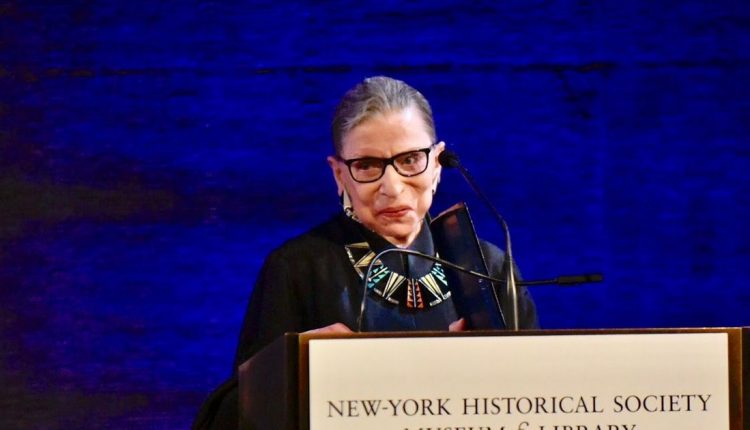 Ruth Bader Ginsburg to be memorialised with statue in Brooklyn

Justice Ruth Bader Ginsburg swore in new American citizens at a 2018 naturalisation ceremony held at the New-York Historical Society, saying: “We are a nation made strong by people like you.”

While painted tributes to the late Supreme Court Justice Ruth Bader Ginsburg have been pouring out across social media, and a mural has popped up in Washington, DC, New York governor Mayor Andrew Cuomo announced this weekend that a permanent memorial statue will be installed in Brooklyn, where she grew up. On Monday, Cuomo suggested a potential location for the work, saying: “Were considering Brooklyn Bridge Park on a site that would overlook the Statue of Liberty.”

"Justice Ruth Bader Ginsburg selflessly pursued truth and justice in a world of division, giving voice to the voiceless and uplifting those who were pushed aside by forces of hate and indifference.” Cuomo says. “As a lawyer, jurist, and professor, she redefined gender equity and civil rights and ensured America lived up to her founding ideals — she was a monumental figure of equality, and we can all agree that she deserves a monument in her honor.” The governor says he plans to appoint a commission to select an artist for the statue this week.

Ginsburg was the second woman ever appointed to the countrys highest court, and was a leading fiRead More – Source

Orford Ness: the apocalyptic art zone at war with nature

Richard Hutchins: the homeless artist who became an Oprah-endorsed sensation