Follow @cnnsportJust ask Gael Monfils. Monfils suspected that he suffered a heat stroke in his outing against Novak Djokovic Thursday, when the thermometer — according to Australia's Bureau of Meteorology — peaked at 39.9 degrees Celsius in Melbourne. Commentators claimed temperatures on court were even higher, soaring to 60 degrees Celsius. READ: Wozniacki's great escapeREAD: Sharapova beats Maria The Frenchman managed to see out his second-round match after a visit from the tournament doctor, but he lost to Djokovic 4-6 6-3 6-1 6-3 in another eventful encounter between the pair who have both recently been hampered by injuries. "I got super dizzy," said Monfils, who fell to his 15th straight defeat by the 12-time grand slam winner. "I think I had a small heat stroke for 40 minutes. Couldn't feel fresh."Monfils trained in the heat of Miami in the off-season — a base in the past for three-time grand slam champion Andy Murray — but said it was no match for what he encountered on Rod Laver Arena. "Was pretty hot in Miami," said Monfils. "I thought I was very good. I'm telling you, I was dying on the court for 40 minutes."Even six-time Australian Open champion Djokovic described the weather as "brutal." He has had his own issues with the heat, memorably at the 2009 Australian Open against Andy Roddick and 2014 US Open against Kei Nishikori. "It was obvious that we both suffered today," the Serb, playing his second official match after missing six months with an elbow problem, told on-court interviewer Jim Courier and the crowd. "Really tough conditions, brutal, especially for the first hour and a half. "I was coming into the match knowing it was going to be a big challenge for both of us. Just hanging in there, trying to use every single opportunity that is presented. Obviously he wasn't at his best at the end of the second and the entire third set." 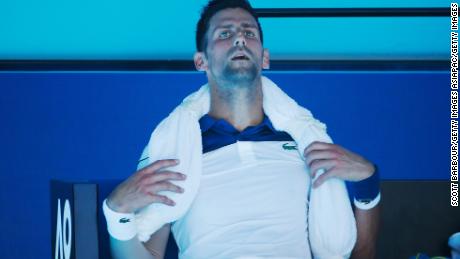 Courier — the former No. 1 and Australian Open winner — told Djokovic he would limit his questions so the 30-year-old could escape the heat, prompting this reply: "You can ask me as many questions as you want in the locker room, ice bath."Rafael Nadal, who contests his third-round match Friday when the temperature is forecast to rise to 42 degrees Celsius, called for organizers to use the roof on the three courts that have cover at Melbourne Park — as much for the fans as players. That didn't happen Thursday. There was continuous play as the tournament's extreme heat policy wasn't implemented. Djokovic later told reporters the heat rule should be revisited since players were being pushed to the limit. "There is a rule about index, combination between temperature and humidity. I'm not so sure about that," he said. "I think there are certain days where you just have to, as a tournament supervisor, recognize that you might need to give players a few extra hours until (the heat) comes down. "People might say, 'Well, at this level you have to be as a professional tennis player, fit,'" he added. "It's the beginning of the season. You kind of work and train hard to be able to sustain these kind of conditions, to be tough. But I think there is a limit, and that is a level of I guess tolerance between being fit and being, I think, in danger in terms of health."It was right at the limit."

'No shame in giving up'

Monfils spared a thought for those in action Friday. "Good luck to them," he said. "I think sometimes, yeah, we put our body at risk. Just be smart. If you have to give up, it's not a shame."Monfils appeared to be the player most troubled Thursday. No players retired and men's fifth seed Dominic Thiem even engineered a two-set comeback, rallying against American Denis Kudla 6-7 (6-8) 3-6 6-3 6-2 6-3. Two-time grand slam champion Garbine Muguruza and Johanna Konta were upset in the open women's draw but neither blamed the conditions, while Maria Sharapova set up a blockbuster clash with resurgent 2016 champion Angelique Kerber. Stan Wawrinka lost to 97th ranked American Tennys Sandgren 6-2 6-1 6-4, clearly not at his best in his first event since knee surgery and his own six-month layoff, but pal and defending champion Roger Federer eased past Jan-Lennard Struff 6-4 6-4 7-6 (7-4) to close play Thursday. "I wouldn't have minded to play during the day," Federer said. "I hope I thrive under those conditions, too, because if you want to get to the top you gotta be able to play in all conditions." Wimbledon champion Muguruza suffered from full body cramps amid the heat in Brisbane earlier in January and then withdrew mid-tournament in Sydney, foreshadowing a rocky Australian Open. Sure enough, world No. 88 Hsieh Su-wei of Taiwan defeated Muguruza 7-6 (7-1) 6-4 and twice grand slam semifinalist Konta — downed by Hsieh at the French Open last May — succumbed to lucky loser Bernarda Pera 6-4 7-5.

Kerber on a roll

Like Muguruza, Konta endured fitness concerns in the build up to the year's first major, retiring in the Brisbane quarterfinals with a hip injury prior to a first-round exit in Sydney. Kerber registered an 11th straight win to begin 2018 in beating Donna Vekic 6-4 6-1, with Sharapova getting the better of her conqueror at the US Open, Anastasija Sevastova, 6-1 7-6 (7-4). Sharapova returned to Melbourne Park this year after sitting out the 2017 edition due to a drug suspension."I was watching this tournament with a box of Kleenex next to me, sick," the five-time grand slam winner said. "So I feel like I transported myself into the TV this year and I'm finding myself on Rod Laver Arena competing. A lot of things to smile about.

Great to be back

"I wanted to be here. I got myself here. Yeah, it's great to be back."Women's No. 1 Simona Halep showed no ill-effects from the ankle injury she sustained in the first round, comfortably dispatching 2014 Wimbledon finalist Eugenie Bouchard 6-2 6-2 in the night session.Juan Martin del Potro, the 2009 US Open winner, overcame a medical timeout for a left leg injury to oust Karen Khachanov 6-4 7-6 (7-4) 6-7 (0-7) 6-4. Visit our tennis page for more Australian Open coverageArgentine Del Potro is one of the danger men for Federer in the Swiss' quarter of the draw but another one, seventh seed David Goffin, was upset by veteran Julien Benneteau 1-6 7-6 (7-5) 6-1 7-6 (7-4). "I did a big effort," said del Potro. "I survive. I will play after tomorrow I hope in different conditions."

North Korea going to the Olympics: 5 things to know