Why is it so difficult to make a sculpture of Cristiano Ronaldo?

To mark this year's World Cup in Russia, an ice sculpture of the Real Madrid star has been unveiled in Moscow. And the glacial effigy is attracting attention not for its likeness to the five-time World Player of the Year, but for its similarity to another statue of the footballer which provoked mirth on social media last year. READ: Ronaldo finally gets realistic statue Follow @cnnsportIn March, a bronze bust of Ronaldo by Emanuel Santos, which was unveiled at Madeira airport, was ridiculed on social media for bearing little resemblance to the man himself. It was replaced in November by a new bust which carried a better likeness.What do you think of the latest effigy to Cristiano Ronaldo? Have your say on our Facebook page. 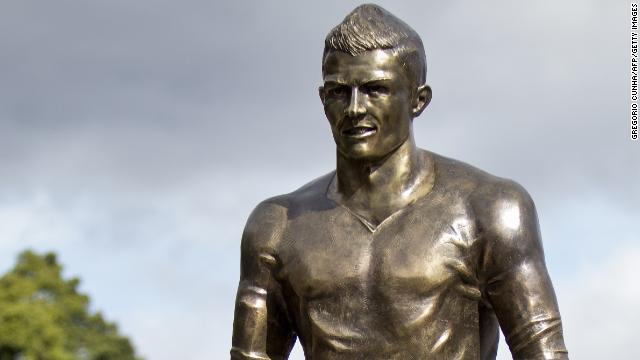 READ: Maradona statue provokes mirth on social mediaThe Madeira bust brouhaha followed another Ronaldo statue unveiling in 2014 which had also caused plenty of merriment on social media because, yes, you guessed it, the 10ft bronze statue in his home town looked nothing like the Portuguese star.READ: Ronaldo immortalized in bronze statue And so to a new year, but a recurring problem for sculptors — how to carve a likeness of one of sport's greats?Visit CNN.com/sport for more stories & featuresFortunately for the former Manchester United forward, this latest interpretation in Moscow's Park Pobedy will have melted away by the time the World Cup starts in June.