Britain stood back and allowed President Bashar Assad to kill civilians and cause a humanitarian crisis, says Tory minister Alistair Burt. He claims this wouldn’t have happened if the UK had overthrown Assad in 2013.

The US and the UK should have launched military action against the Syrian government, Burt told the Huffington Post. His support for armed intervention and regime change is undimmed by the sorry example of Iraq in 2003, in which the UK joined the US-led coalition that toppled Saddam Hussein without a workable plan for what should follow.

In 2013, the Assad regime was accused of mass murder with the use of sarin gas near the capital, Damascus. Then-UK Prime Minister David Cameron asked Parliament to allow him to intervene militarily, even as his project in Libya was falling apart. But Parliament voted against intervention, defeating the government motion. Many remembered the mistakes made in Iraq and sensed the widespread public opposition to another costly war. The US acknowledged the mood and followed suit.

Burt thinks this was a mistake. He still insists political change is the only way to bring peace to Syria. The International Development Minister told the Huffington Post that Britain gave Assad the “green light” to continue down a road of death and destruction. He said then-US President Barack Obama was heavily influenced by the British vote, leading to non-intervention and all its “consequences.”

“It was seen as a green light by Assad in killing his people. He didn’t need to kill them exclusively through chemical means; he killed them through mechanical means. He continued his war against his own people,” he said

“And the green light was also seen by other powers, Iran and Russia, who then moved into the space vacated by the United States with consequences which we have seen.”

What Burt does not detail is how exactly the country could have been stabilized after bombing and ousting its leaders, and who would have replaced Assad. Judging by Iraq and Libya, the Obama-Cameron coalition would have probably neglected that part, too, until it was too late.

Syria was on the brink of revolution in 2011. The groups that have been vying to take Assad’s place since, however, are not all the polished, western educated politicos London dreams of – Cameron’s so-called “moderate rebels.”

One such group, the Free Syrian Army (FSA), attacked Aleppo and has been accused of war crimes. On the outskirts of the city in FSA areas a police force was created to enforce Sharia law, a replica of the Wahhabi police in Saudi Arabia. The very same doctrine is followed by many extremists.

Burt also fails to make a convincing point on the refugee crisis, which has seen more than a million desperate people flocking to Germany alone. Perhaps bombing Syria and toppling Assad may have made Britain feel a greater responsibility for the refugees streaming out of the region. Yet Burt seems to suggest the refugee crisis wouldn’t have happened at all if British and American bombs had been dropped on the country.

Burt said he is aware there was no public appetite for intervening in the Middle East, despite the horror stories appearing in the media, but that it should have been done regardless. 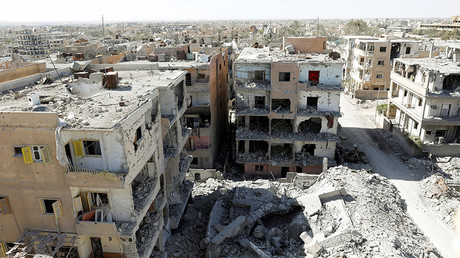 “Let’s be very clear it wasn’t individual parties in Parliament. Nine out of ten of the letters I received as a minister and as a constituency MP said ‘don’t touch this with a bargepole, don’t do this.’

“The British people said very clearly don’t get involved. I thought we should, which is why I both advocated and voted the way I did. No one knows what would have happened had the vote been passed and had the United States enforced a red line. What we do know is what happened because we didn’t.”

Although Burt recognizes the mistakes made in Iraq, he insists doing nothing is also a mistake.

“There’s no finger-wagging from me on the Middle East. We are all dealing with incredibly difficult and complex areas. But we learn from experience what to do and what not to do. And the thing we learned in 2013 is all actions have consequences. Even if you decide not to intervene, it has a consequence. Up until then people only thought there was the consequence of intervening. Now we know that’s not strictly true.

“It doesn’t make the decisions we are going to make in the future any easier, but at least it puts in the balance that things happen if you don’t do something as well as things happening if you do.”

Family ‘trapped’ by enormous puddle outside their front door