I was a teenager when my parents, whose birthdays were very close together, celebrated their fortieth birthday. I thought, “Forty. Man, that’s old.”

I am now a few days away from turning that same age and I am feeling it. It’s an odd age to anticipate.

It’s like standing on the dividing line — the precipice — of the average human life span.

The lines on my face are coming in like teeth. White licks are showing up in my hair. I’m fit, but when I wipe out on my mountain bike and get wounded, it takes noticeably longer to mend.

Perhaps my wife saw a train wreck coming. She watched me carefully; she could smell the impending mid-life-crisis. And so, in a wise preemptive strike, she decided to take me to the oldest living being known to humankind.

We flew into Las Vegas, drove through Death Valley, and then passed through the Owens Valley — with the Sierra Nevada Mountains flanking us on one side and the White Mountains of California on the other.

Inyo National Park was closed in April, which meant that we had to hike from the gate at the main road, head high up in the mountains into the Bristlecone Pine groves. We had the park to ourselves.

The temperature was two degrees Celsius, and the air was very thin at an altitude of 3353 meters. My breathing was laboured, as though I had been running. But the air smelled of wild lavender and it was as refreshing.

As we ascended, the clouds closed in on us with a light drizzle, but then gave way to the sun. There was still snow on the ground, as deep as sixty centimetres in some snowdrifts.

After an hour of hiking uphill, we caught our first glimpse of one of the most ancient forests in the world, where the trees are thousands of years old. The forest seemed enchanted, as though the trees were going to start walking or talking, or something else equally surreal.

Maria and I walked along the path of the Bristlecone Pine grove, zigzagging up and down hills, walking past old survivors.

There too were the remains of the ones that didn’t make it, still defiant.

Ancient Bristlecone Pine trees in the White Mountains of the Inyo National Forest near Bishop, California. With some at over 4,700 years old, they are the oldest trees in the World. (GABRIEL BOUYS/AFP/Getty Images)

I took some time to examine those dead trees. Some of them were quite small, and probably no more than a few centuries old — babies.

I wondered what had gone wrong for them. Maybe disease, or maybe one year was just too dry to bear. I know I have taken my own health for granted. I have to stop that.

We followed the path until we came to a clearing on the hillside where the forest stopped. Out in the open, far from the forest stood a single, living tree. You see, the longest lasting Bristlecone Pines are those that exist in exile from the rest.

Both Maria and I stopped in our tracks. We felt we were in the presence of something extraordinary. But it was just a tree standing there, not doing anything but surviving — surviving for just short of 5,000 years.

That old Bristlecone Pine, named Methuselah after the oldest patriarch in the bible, has stood in that one spot up in the Inyo National Forest for over 4,770 years. It stood high when Pharaohs were building pyramids to testify that they, too, were once alive.

I hurried down the hill to see Methuselah up-close. I ran my fingers across one of his dead branches. The bare wood, stripped of bark and polished by the elements over many years, felt as smooth as an expensive marble. I caressed the bark that kept him alive, and stroked the soft pines on his branches. I was profoundly moved.

I had read all about the bristlecone pine. Prior to the trip into the White Mountains of California, I drove my wife crazy about the old pine that doesn’t know how to die. I prattled on about mundane statistics: the ancient being stands approximately 8 metres tall, with a girth of nearly 3.35 metres.

Methuselah still has every sign of life as he is still growing, and he is still fecund. The Sierra Nevada Mountain range steals all the moisture given from the ocean, leaving the Bristlecone Pines high and dry. In the course of a year, the tree’s thirst is quenched with approximately 25 centimetres of precipitation, the majority of it drifting down during the winter. 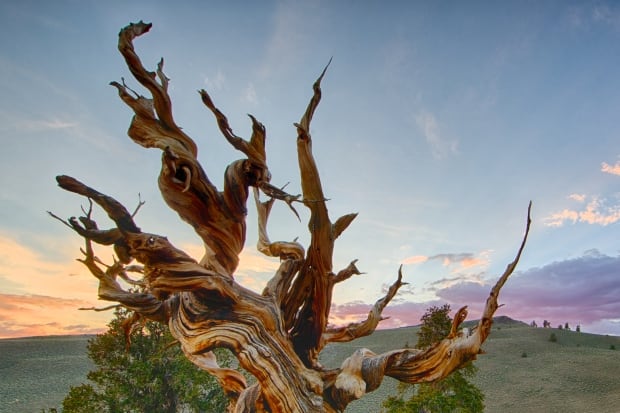 “It was just a tree standing there, not doing anything but surviving — surviving for just short of 5,000 years.” (Chao Yen/Flickr)

Scientists claim that Bristlecone Pines have no genetic coding for senility, no trigger for degeneration. If conditions remain adequate, this old thing could stand there in that one spot high upon the Earth until the sun explodes into a supernova.

It is puzzling that anything could survive, with this kind of longevity, in such an inhospitable environment. Paradoxically, it is the harsh elements at this altitude that allow these sculptures of nature to prevail: the dry, thin air limits the growth of fungi, bacteria, and insects that can invade a tree; the dolomite stones, the size of a woman’s hand, reflect sunlight, keeping the roots cool and moist.

There is little competition for the scant surrounding recourses, allowing the Bristlecone Pine to sprawl out its root system with a firm grip, squeezing out any nourishment it can from the stingy ground.

This struggle to stay alive in the harshest of conditions — and the success of it — had me feeling feeble, lucky and spoiled.

Maria came down from the edge of the forest and joined me. Together we stood at Methuselah’s side, humbled by nature, dwarfed by time.

I directed a smile of gratitude toward her for putting my milestone birthday in a completely new light.

The post How a powerful message from the world’s oldest tree saved a man from a midlife crisis appeared first on News Wire Now.

This is why ‘complicit’ is Dictionary.com’s word of 2017

Jamie Benn: ‘It was a smash-mouth of a victory and I thought our fans were the all-stars in overtime’

More than 15 million children and their families in Yemen, Syria and Gaza set to face…